Dave Tonnesen, who founded SwimKids with his wife Cindy, isn’t just the leader of our swim programs – he is the very first SwimKid!

After Dave’s mother nearly drowned due to a lack of swimming ability and confidence, she vowed that her children would learn swimming and water safety from an early age. This meant that Dave fell in love with the water when he was young, and developed a lifelong interest in the sport of swimming.

Dave became an outstanding swimmer, competing first as a youth in local summer swim teams in NOVA and later as a collegiate athlete at Virginia Tech. During his time at Virginia Tech, Dave suffered a career-ending injury. The injury, however, had a silver lining – it led him to switch gears from swimming himself to coaching young athletes – a passion that would shape the rest of his life. A passion that continues today.

While working as a professional full-time swim coach in the early 90’s, Dave met Cindy, and it was love at first pool. No, you didn’t read that wrong! Dave actually proposed to Cindy in a pool! Not only that, their engagement party took place at a community pool too. Swimming shaped Dave and Cindy’s lives together. They would soon learn that swimming would become the family business!

SwimKids was founded in 1996 when Cindy and Dave realized it was hard enough to feed a family on a coach’s salary, let alone save for college. The very first SwimKids lesson was taught in the Tonnesen’s backyard pool in 1997. This began what the couple calls the “science project years”. Dave coached full-time and provided lessons on the side, while Cindy dedicated herself to developing a working business model for SwimKids.

Much has changed since the SwimKids’ early days. The administration office is no longer a spare bedroom (we have beautiful world-class facilities instead!), and registrations are no longer managed with a simple word document.

The important parts of the business, however, have remained the same. Cindy and Dave’s dedication to helping every child fall in love with the water has been consistent since day one. SwimKids grew from a backyard dream into a respected local business because of their passion and joy of bringing swim lessons to children just like yours.

Their guiding philosophy and team of coaches have taught over one million swim lessons to families in the community, and brought millions of bright smiles to swimmers’ faces around our pools!

SwimKids has always been local
SwimKids began with a backyard pool. We kept SwimKids local ever since. 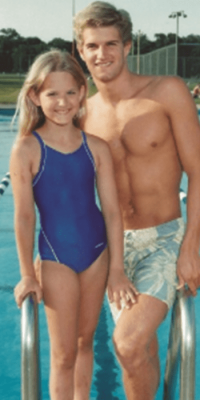 Dave begins to spread his love of swimming to younger generations by coaching for the Veterans Park Swim Team during the summer of 87’! This is him pictured with his younger sister, Krissy, who is now a part owner at SwimKids and in charge of operations. 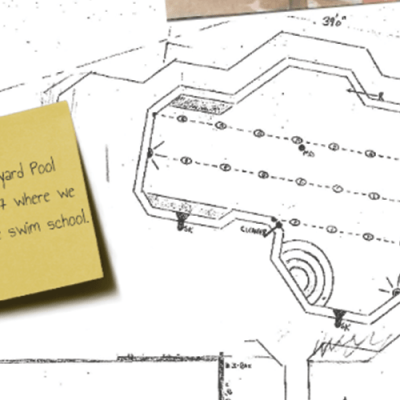 Dave and Cindy built a backyard pool in 1997 so they could begin teaching lessons in the community during the warm summer months! 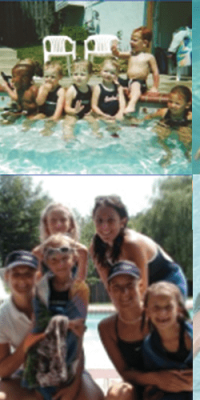 The first several years were focused on finding the right system, the right coaches, and the right teaching methods that would ensure success for each and every swimmer! 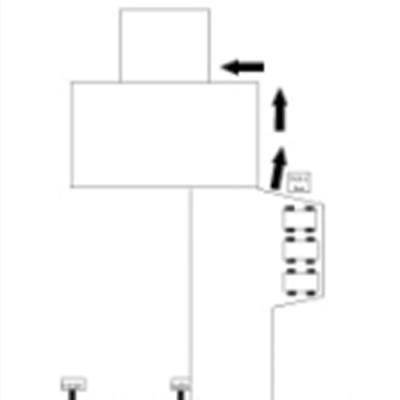 Cindy worked out the logistics for Eagles Nest, their home swimming pool. 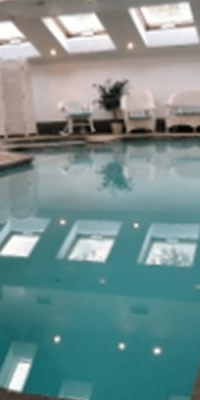 Cindy and Dave move to Manassas, VA in 2003 to a home with an indoor pool, to serve the excited swimmers and families who wanted the joy and benefits of swimming all year round. Cindy had to get a little creative with parking spots so as to avoid upsetting neighbors! 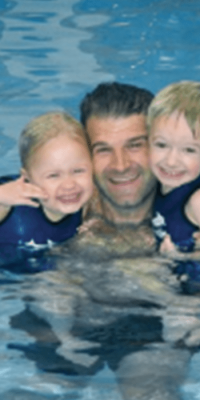 Cindy and Dave continue to teach lessons at their home and further develop the curriculum and business. The smiles these lessons were bringing were pretty hard to ignore — they knew they were doing something right! 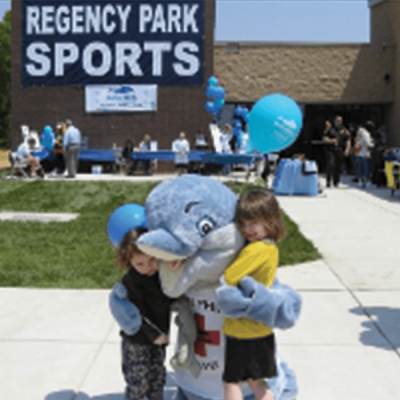 We worked with the Regency Sports Park in Fredericksburg, VA to begin teaching our lessons at their facility in 2005. 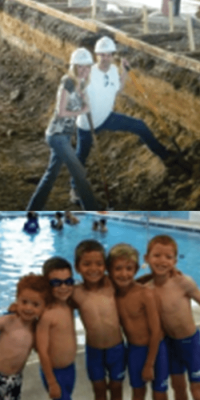 Cindy and Dave created their own facility for our families’ specific needs from scratch in Gainesville, VA. This location is still as stunning as it was on opening day! 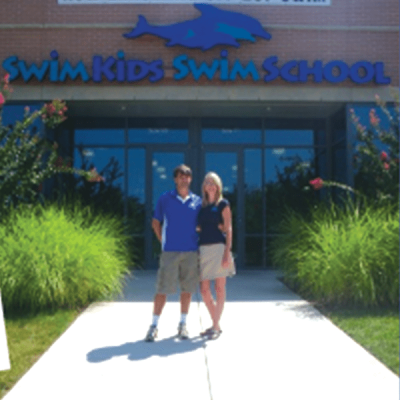 The doors to our very first custom made SwimKids swim school open for the first time. 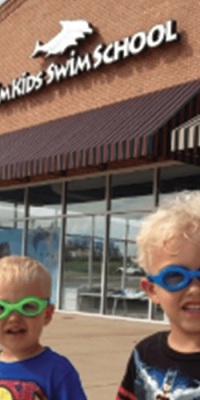 Coming to a pool near you!

We expand our business to Leesburg, VA. (and yes, we do have plenty of these highly fashionable goggles at all our locations!) 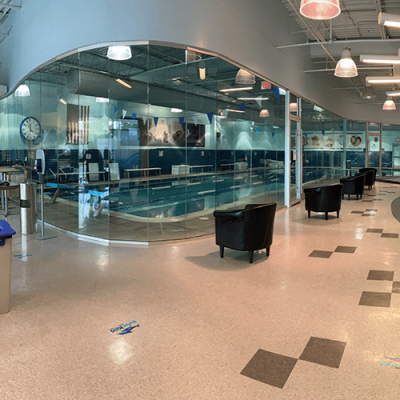 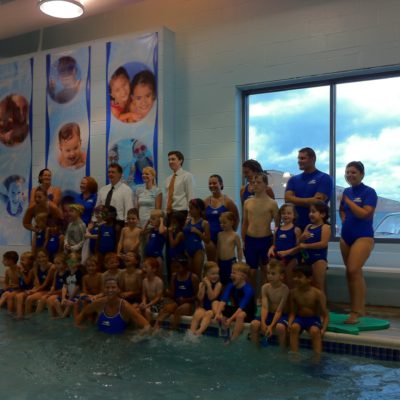 Each year in June SwimKids participates with swim programs all around the world in The “World’s Largest Swim Lesson. The event focuses on necessary water safety skills. Upon a 3-2-1 countdown, thousands of children all over the world participate in the same swim lesson to help fight high global rates of child drowning! 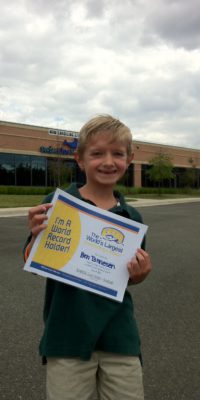 One for the Books!

You can bet our swimmers get very excited about being in the Guinness Book of World Records! 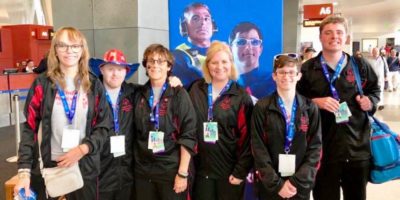 SwimKids knows that all children have the potential for greatness in the water. We are passionate about providing high quality and individualized training to people with various special abilities so that their swimming goals are achievable. Here’s a few of our outstanding swimmers at the Special Olympic Games in 2018! 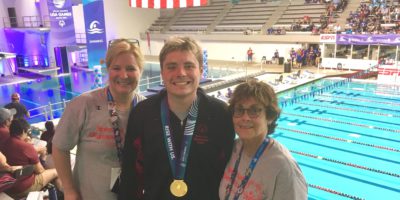 One of our extremely talented swimmers took home a 2018 Gold Medal in one of his events at the Special Olympics USA Games! We couldn’t have been more proud to have been a part of his training and swimming success.